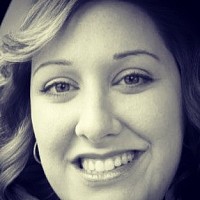 My name is Ali Baldridge and I have a rare kidney disease called Loin Pain Hematuria Syndrome.  This debilitating illness affects approximately .012% of the entire world's population.  So, to call it rare would be an enormous understatement.  Currently there is no cure, but we pray every single day that this will change.  My hope in creating this site is to educate people and spread awareness of this disease.  Awareness is key in keeping hope alive that one day we may be cured.

You may wonder why I decided to call my website "The Spaces in Between".  It represents the way I choose to live my life - living for the spaces in between - the days I am able to get out and enjoy my life.  So many days are filled with pain and I look forward to those days when the pain is a little less and I am able to enjoy spending time with friends and family.  Whether we go shopping, out to eat, or to a movie, those days are special.  They get me through the tougher days.  I am truly blessed to have such wonderful people in my life.

***The procedure discussed below has only temporary effectiveness.  There is currently no cure or permanent treatment for LPHS.*** 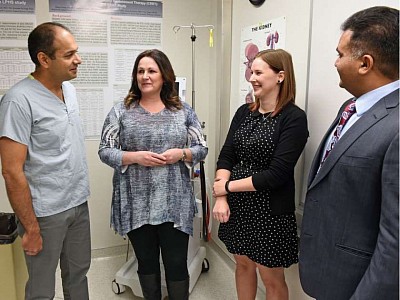 With a pile of pillows tucked around her as shock absorbers in a painful ride from Estevan to Regina, Devaney Mehl travelled with her husband Chad to meet a kidney specialist — hoping for a chance to regain a normal life.

Mehl had been adventurous — she was a rock climber, sky diver, horse rider, hiker and swimmer. Her active lifestyle ended last March after having laparoscopic surgery to remove a kidney stone. Her back pain never disappeared.

"I wasn’t able to get off the couch," she said. "I was sleeping all of the time … I have a love-hate relationship with my kidneys."

Besides unremitting pain, the 28-year-old was nauseous and dizzy. She was a regular at Estevan’s emergency room and frequently away from her job as a social worker.

For five months, she couldn’t even wash dishes because bending was excruciating.

Despite numerous tests, physicians didn’t know what was wrong so she was referred to Dr. Bhana Prasad, a Regina kidney specialist. Within days, the nephrologist called to tell her she had loin pain hematuria syndrome — a rare disease with a worldwide prevalence of 13 people per 100,000 population.

Finally, Mehl could put a name to the cause of her pain.

Although she’d taken pillows to sit on when she met Prasad, she was in too much pain. She constantly paced.

"We’d never seen that degree of pain," Prasad said. "This was an eye opener for us."

He decided Mehl was a candidate for renal artery denervation — a procedure previously done in Regina for 36 patients who require four or more medications to control their blood pressure — and a couple of patients with loin pain hematuria syndrome.

Dr. Kunal Goyal, an interventional radiologist, performs the procedure at the General Hospital.

He inserts a catheter through the femoral artery and feeds it inside each renal artery.

A machine converts electrical energy to radio-frequency energy, which is applied to the inner lining of the blood vessels through an intraluminal catheter. The energy then dissipates from the inner wall to the external wall where the nerves travel and the pathways are killed. The aim is to disrupt nerve impulses between the kidney and the brain.

"Most of them are on a large amount of opioid drugs, which is life limiting," Goyal said. "Some patients have even had their kidneys removed in an attempt to reduce the pain. This option is very viable, very safe and very effective for treating these patients."

"This technology is not yet approved in Canada so for every individual patient, we apply for a special Health Canada approval for the use of this device," Goyal said.

After undergoing the procedure last September, Mehl tapered off medication and had no pain for six months. She worked part-time until the pain returned. She will undergo the procedure again next month.

At that time, she will get general anesthetic and multiple ablations will be done closer to the kidney and away from the kidney.

"Before we did the procedure closer to the main artery, but not close to the kidney," Prasad said.

Despite numerous investigations and research studies, it is not known what causes the intense pain associated with the syndrome.

The work being done in Regina is "uncharted territory," Prasad said.

"There’s nobody out there that we can learn from so what we learn, we will be sharing with the rest of the world … We want young Canadian adults to go back to work and be productive in their communities," he said. "If we can get them to that goal, it will be a success."

Regina is the first North American site to be involved in a study of 10 patients. Prasad is the principal investigator in the Prairie Loin Pain Hematuria Study.

On the team is nurse practitioner Shelley Giebel. She collects data such as patients’ pain, their quality of life and mood before the procedure, immediately afterwards and at three and six months.

"From what we learn, we can then provide feedback," Prasad said. "In December, we’ll be writing up a second case series that we intend to send to a medical journal called Kidney International."

Patients from Calgary, Saskatoon and Estevan have had the procedure. An Ontario patient will undergo treatment in Regina later this month.

Mehl, a member of an online loin pain hematuria syndrome support group, knows many people have no options.

Prasad’s next step is to get funding from national agencies and philanthropists so a Canada-wide study involving 80 patients can be done to prove the procedure does not produce a placebo effect.

He estimates the study’s cost at about $1 million.

Mehl acknowledges the procedure hasn’t allowed her to resume the life she used to have, but it has opened doors.

"I always say Dr. Prasad needs a cape. He really is a super hero for us because he’s giving us hope and without hope there is nothing."

Made with SimDif
Ali Baldridge